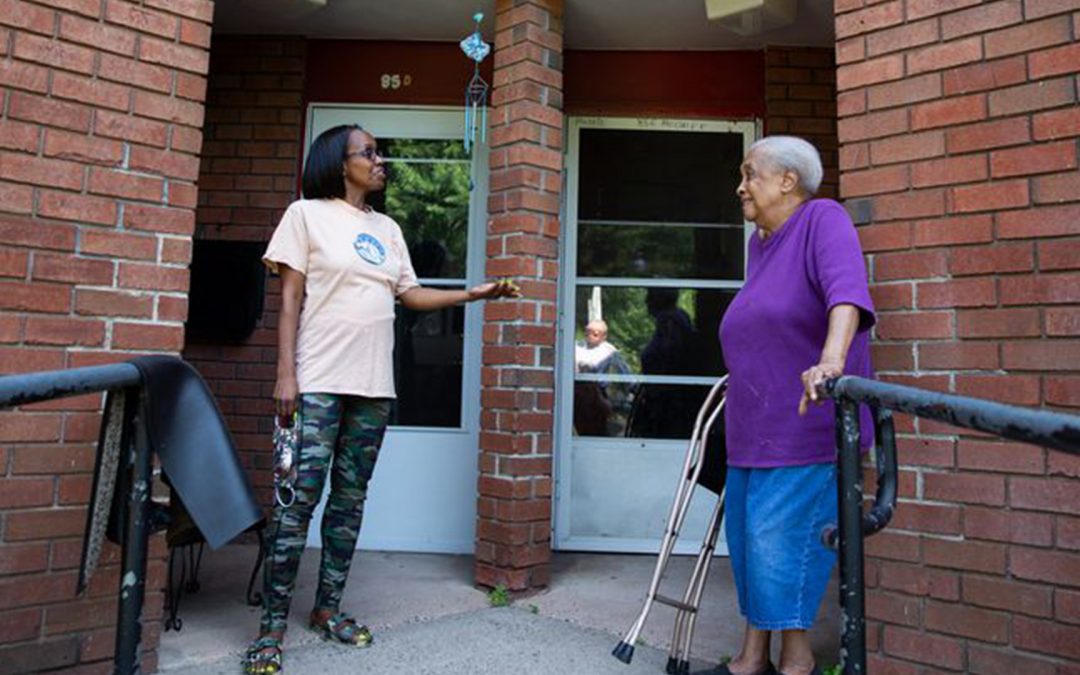 Two decades later, the low and moderate income rentals stand out in a neighborhood transformed by the revitalization of the once-decaying Colt manufacturing plant, the Capewell Horse Nail Co. factory, the Dutch Point public housing complex, Dillon Stadium and the Sport and Medical Sciences Academy, a magnet middle and high school.

A $50 million plan to raze and rebuild the MLK Apartments on Van Block Avenue is the final major piece of a redevelopment puzzle envisioned in the 1990s to strengthen Sheldon/Charter Oak, just a short walk from downtown.

The project, however, won’t come without major disruptions for the tenants, some of them living in the apartments for decades. The tenants will first need to pack up and be temporarily relocated elsewhere, either in the city or the surrounding area. Their moves will be paid for, and tenants could qualify for rent subsidies if their temporary rents are higher than at the MLK Apartments.

The move will affect households in the complex’s 64 units and is expected to begin early next year, in late winter. Once that is complete, construction on 161, mixed-income units will start after demolition, with the project anticipated to unfold over 18 months.

Tenant Greta Green admits she’s anxious about all the changes and where she will live in the meantime. Green said she doesn’t want to be relocated far from her customer service job downtown. And Green, who just turned 50, definitely wants to return to the only place she’s ever called home.

She does have a good shot because current tenants are being given first preference at the new apartments.

About a year ago, Green walked out of her apartment and noticed that the letter “F” marking her area of the complex on the ground.

“It was so tired that my letter just fell off,” Green said.

A place with potential

Neighborhood leaders in the Sheldon/Charter Oak see the redevelopment as a milestone — even capstone — to two decades of efforts to revitalize the neighborhood, mixing market-rate apartments with affordable units and attracting investment in development projects.

“People no longer look at this as a place to be avoided but as a place that has potential,” said Chris McArdle, treasurer of the Coalition to Strengthen the Sheldon/Charter Oak Neighborhood, a neighborhood revitalization zone organization.

The mixing of incomes in housing developments seeks to avoid the dense concentration of lower-income households, which was the standard in the late 1960s when the MLK Apartments were built.

“What Sheldon Oak is doing is really transforming MLK from a sort of backwater of people who are living on the edge of poverty to a place where it is going to be a mix of the population,” McArdle said. “Hopefully, that will mean more of the workforce will continue to move into this neighborhood.”

Emily Wolfe, executive director of Sheldon Oak, said the seven acres encompassed by the MLK Apartments also are isolated from the rest of the neighborhood because the complex lacks streets running through it.

“It looks a little forbidding, so the important thing is that we want to integrate it back into the neighborhood,” Wolfe said. “We’re doing that with a pedestrian design, a pedestrian boulevard going through, now there are just cul-de-sacs.”

The design, Wolfe said, will connect the MLK Apartments to Stonington Acres, another development rehabbed by Sheldon Oak, and Dutch Point, a mix of apartments and townhouses, as well as the surrounding community, close to Colt Park and the riverfront.

“They will be one community, not separate,” Wolfe said. “The way they were designed they were separate housing projects, which is a very public housing way of looking at it.”

Looking to the future

When the MLK Apartments were built in 1969, the project won architectural accolades for its innovative design, appearing from the air in the shape of a chevron.

But in achieving that shape the complex took on secluded atmosphere that invited crime and created apartments that were small with sharp angles.

The complex also was originally twice as large, with 124 units. Sheldon Oak purchased the complex in 1996 from the nearby Church of the Good Shepherd under the leadership of former executive director Daniel Merida. Sheldon Oak demolished half of the units, cutting back on low-income density that was then viewed as fostering urban crime. The remaining apartments were then renovated.

Sheldon Oak considered another renovation in recent years, but it would have cost millions. A renovation would not have solved fundamental problems of all the units being townhouses with bathrooms exclusively on the second floor, a hardship as tenants age, Wolfe said. There also are no one-bedroom apartments, which are sought after in the Hartford market, she said.

Looking to the future, Sheldon Oak and its partner, Vesta Corp. of Simsbury, an owner and developer of affordable housing, plan a project that will borrow from the look of the historic, former Colt worker houses across Van Block Avenue.

The apartments will be a combination of flats and townhouses, with one, two and three bedrooms, ranging in size from 774 square feet to 1,683 square feet.

The design includes one large, L-shaped central building with flats and an elevator with older tenants and the physically disabled in mind. There will be 14 smaller building with six or seven apartments.

Greta Green’s next door neighbor, Mamie McGriff, has lived at the MLK Apartments for decades, just about as long as Green. But, at 78, McGriff is finding it tougher to climb the stairs to the bathroom and would like an apartment on one floor.

“I had to buy one of those potty chairs from Walgreens so I could have it in the hallway,” McGriff said. “I can’t be hitting those stairs too many times.”

Wolfe, of Sheldon Oak, said the nonprofit has applied to the U.S. Department of Housing and Urban Development — with the city’s support — to designate 40 apartments, or 30% of the project’s rentals, for Section 8 subsidies. The subsidies mean tenants would only have to pay 30% of their income in monthly rent.

Plans call for buildings to be arranged around a central green with a gazebo and playscape. All ground floor apartments will have front porches to open to the street.

An existing mural mounted on a building, depicting landmarks in Sheldon/Charter Oak, will be saved and displayed at a new entrance.

The city has approved the master plan for the project. Financing is nearing completion and is expected to include a mortgage from the Connecticut Housing Finance Authority and federal low-income housing tax credits.

Linda Nelson moved to the MLK Apartments 20 years ago and has since retired from a job as an operations manager at UConn Health.

Nelson said she wants to return to the redeveloped complex. But she worries about gentrification and being able to afford to move back.

“We’re used to being in this area — not saying that we don’t want improvement in our city — but give us a chance to live in it,” Nelson said in the living room of her apartment.

“We see all these buildings going up and it’s like, they are cornered off from us,” Nelson said. “It’s going on all-around us, and everybody is living the luxury life.”

Nelson said she took a tour of the rentals in the converted Capewell factory. She loved the apartments but bottom-line, she couldn’t afford to live there.

“It’s really frightening for an older person like myself,” Nelson said. ‘I don’t work, so I’m basically low income. I’m on Social Security but the thing that is scary, not only for myself, but a lot of us, we see these buildings — if our Social Security were up to par or keeping up with the cost of living, we could probably get one of these apartments — but we’re stuck.”

Wolfe said the primary goal as the property’s owner is to not displace any tenants.

“So that’s a first-order goal,” Wolfe said. “A lot of people have lived here for a very long time, and it’s always been naturally affordable. We’re very conscious as neighborhoods change, we don’t want to displace the original residents.”

For the full article, please visit: